by Deborah Ouellette | Mistakes - I've Made a Few 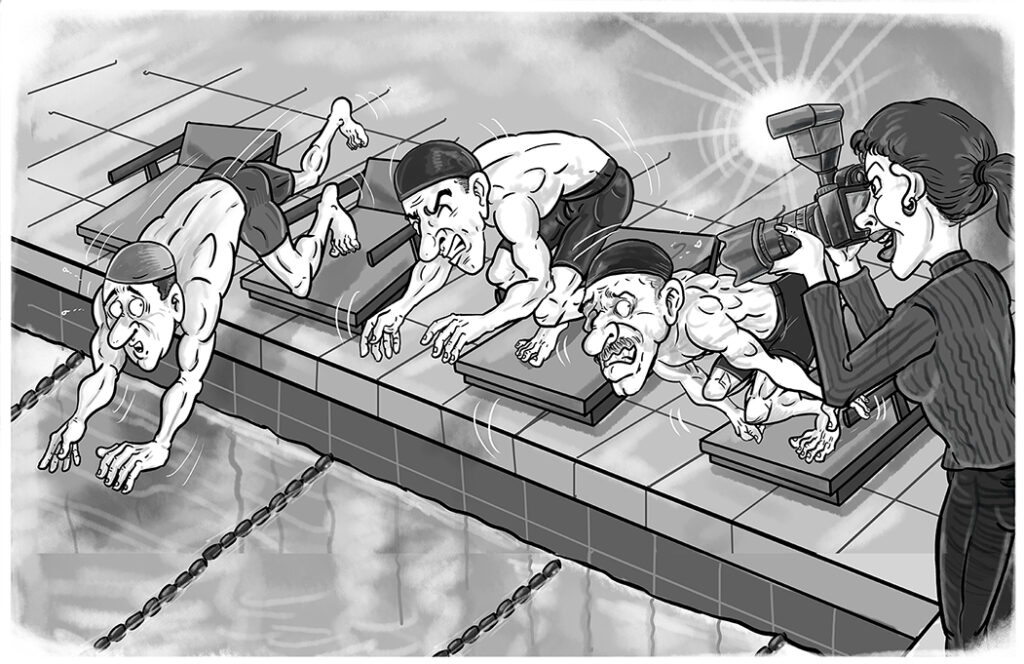 I was so excited. After my first semester in college, I was offered a chance to apply for a summer job shooting real estate ads for the Ann Arbor News.

No one in my class seemed to want the job (thinking it was beneath them), but I saw it as a step up and couldn’t wait to get started (I was cleaning toilets and windows at Sears at 4 in the morning to help pay for school).

It didn’t take long for my boss and chief photographer — Cecile Lockard — to realize I was eager to learn. He took me under wing and put up with all my early mistakes (like the fiasco at my first University of Michigan swim meet). To this day, I credit him for making it possible for me to make a living, travel, and network with amazing people throughout my photography career.

But this first assignment for the men’s swim team at UofM?

My lack of experience showed itself that day.

I got to the meet early so I could try to scope out the best place for me to shoot from. I was told it would be okay to use a flash, just not to aim it directly into the swimmer’s eyes.

I thought it would be best to shoot from behind the swimmers as they launched into the pool, so I positioned myself against the back wall.

I didn’t realize that — before the swimmers launched into the pool, they swung their arms back, meaning their faces were briefly facing the back wall.

So, when the time came, I took the shot, then watched in horror as the swimmers lost balance and fell into the pool. Everyone on the sidelines was looking at me as if I were the biggest beanhead in the world — and at that moment, I would have done anything to develop superpowers that allowed me to become invisible.

Luckily, everyone gave me a pass (after apologizing profusely) and — after a brief chat with the coach — I was allowed to continue shooting. I’m not sure anyone even told the boss (at least he said nothing). And — when all was said and done — I ended up being published with an amazing shot of a swimmer in the best possible position during a butterfly stroke.*

Thanks to the patience and kindness of the swim team and coaches at UofM, I was able to stay and learn not only how to shoot a swim event without embarrassing myself. I also learned how to make good after a clumsy mistake. And one of my best images (see P.S.) was published — after being told that I would most likely not get published (especially in UofM football) for at least a year.**

I am forever grateful to everyone from my Ann Arbor News days, where I learned what it takes to think on my feet while creating publish-worthy images.

No worries about the end of my run with the paper. I had made some important contacts while working for the paper and had an easy transition into what would become my primary career focus: photographing headshots and ports for the modeling/talent industry! Roughly a year-and-a-half after being hired for the summer to shoot real estate ads, the suits at the paper realized they forgot to let me go and that they couldn’t afford to keep me on.

You never know when something that seems pretty insignificant in your journey can turn out to be quite an adventure.

Know that mistakes are part of the learning process.

We all make them. What’s important is that you learn from your mistakes and do your best to avoid making the same mistakes repeatedly.